Yes. Yes, you do. And frankly, you should be excited about the opportunity. People who can speak, intelligently and compellingly, control their destiny and the destiny of others.

Or, if you’re looking for a more practical motivator, the ability to speak well can land you  promotions and big raises.

I didn’t know I knew this stuff when I started teaching public speaking….

When first asked to teach a public speaking class I looked over my shoulder to see who the department chair was talking to. I didn’t think I had the experience or knowledge it took to teach public speaking. Turns out I did. I’d been giving extemporaneous, manuscript and impromptu speeches throughout my television career.

Every night when I did my weathercasts,  I gave an extemporaneous speech with visual aids.

Before I walked into the studio I had an idea of what I would say in which order. My weather maps would give me clues.

The thing is, I didn’t rehearse what I was going to say word-for-word.  I would practice.  I had a plan about what I would say before I walked into studio.  I had visual cues to remind me what to say.  But what I said on air was not exactly the same as what I said while practicing.  Each night, my extemporaneous speeches to my television audience got better, as I got better at planning and gained more experience speaking.

When I did live shots, like this one at the Eastern Idaho State Fair, I would often be asked to give impromptu speeches.

The anchors would ask me a question and I’d have to come up with an answer on the spot.

Or some crazy person would yell something stupid and I’d have to deal with it on camera. No script. No preparation. Just experience and quick thinking.

As a reporter/anchor I gave manuscript speeches. Our scripts were written up and we would read them — pretty much word-for-word — using the TelePrompter in the studio. Or, when cutting audio for news stories, I would read the script from a paper I typed up.

The trick to being a good anchor/reporter is to know the words in the manuscript and use voice intonations to better communicate those words. If you just read the words they just wouldn’t have much impact.

A story about my dad and the tradition of reading “The Night Before Christmas.” (And my sneaky way of explaining the importance of voice intonation.)

When I was a kid, my dad would gather all five of his children into a bedroom on Christmas Eve. He’d bring a candle and this copy of “The Night Before Christmas.” We all sat on the bed surrounding him. The room would be dark, with the youngest child precariously holding the candle that cast light onto the pages.

Dad would slowly open the cover of the book after commenting about how happy Santa looked, what great mittens Santa had on his hands and how fuzzy his hat felt. As the first page revealed itself, my dad would start to read the words…“Twas the night before Christmas and all through the house, not a creature was stirring; not even a mouse.”

Now, if my dad had read those words in a monotone kind of way, I would NOT be telling you this story.

My dad read each and every word with meaning. He used pauses. “Twas the night before Christmas…… and ALLLLLLLLL through the house….not a creature was stirring…” He would even lower his voice to a near whisper when reading the words “… not even a mouse.”

It’s been decades since I’ve heard him read those words, but they still ring inside my head and the heads of my brothers and sister.  Why?  Because my dad used intonation, phrasing, pausing and volume changes to totally hook his five children into the story.  Some of the grandchildren are old enough to remember Grandpa reading “The Night Before Christmas” to them, and they remember it the same way.

The right delivery approach for the right situation

Each type of speech delivery; extemporaneous, impromptu, manuscript… and memorized have their pros and cons.

Memorized speeches are great, if you are an actor on a stage. It’s often critical that you say the right words in the right order for the story unfolding on stage to make sense. Also, actors “act” out the words, so they have meaning.

Students will ask me how I knew their speech was memorized.  The answer is simple.  Your speech was stiffer than heck, and you didn’t respond to the audience’s non-verbal feedback.  Oh, and several times you had to awkwardly pause as your eyes scanned your brain looking for the next word.

While the words might be correct, the audience doesn’t feel the speaker is genuine about the topic… unless the speaker happens to be an actor on the Broadway stage.

Manuscript speeches are great, when each word is important and you don’t want to be misquoted. 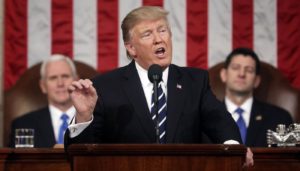 Every State of the Union address is a manuscript speech.  Trump, Obama, and every other modern day president, reads the finely crafted words off a teleprompter.

The State of the Union isn’t the first time the president read his the speech.  He’s spent hours, days, weeks, revising and rehearsing the speech in front of staff to nail down the pacing and where to place emphasis.

The problem with manuscript speeches is, if you get off script, it can cause problems.

For example, I covered a State of the University speech at Boise State University.  The staff gave the reporters copies of the speech.  At one point he was suppose to say a sentence that contained the word “not.”  Turns out he skipped over saying the word “not” which changed the entire meaning of what he was trying to communicate.  So, something like “I will NOT require professors to give homework” became “I WILL require professors to give homework.”  He didn’t even catch himself making the mistake.

Impromptu speaking is great, if you don’t have time to prepare.  It’s an “off the cuff” type of speaking.  This is a great skill to develop so you can communicate a message intelligently and clearly.  The trick here is to think before you speak.  Map out a game plan for what you are going to say.  Hit the main points and keep them simple.

First, you seem more genuine.  It’s as if you were speaking from the heart rather than from your head.

This slide from a Public Speaking PowerPoint presentation outlines some of the other advantages.  I think the final one is one of the most important.

An extemporaneous speech allows you to adjust and modify your speech on-the-fly based on the non-verbal feedback you receive from your audience.

But Terri, this is good…no… great information but I still don’t like the idea of public speaking

Tough luck.  You are going to give a speech.  Speaking, and speaking well, is an integral part of human communication.

In my years of teaching public speaking I’ve discovered a couple of things.

First, people who say they have speaker anxiety generally create the most organized outlines.  It’s their way of getting some control over the situation.  The trick for them is to not “read” their outline.  They need to focus on connecting with the audience.

Second, people who say they don’t have a problem speaking in front of people often admit they don’t feel as though their message is getting across.  It’s too haphazard.  Too unplanned.  Too off-the-cuff.  The trick for these folks is to take a tip from the speaking anxiety folks and get organized.  Create an outline.

And that’s exactly what I’ll be covering in my next blog.

Before the assignment section of this blog let me leave you with one thought:
When you give your speech on grasshoppers, motocross, wheat harvest or whatever, you are the expert in the “room.”  The chances of someone in this class knowing more than you know about your topic is nil to none.  Speak as if you are an expert.  Because, in this class, you are.

Below you will find two different videos.  Choose one you think will best answer some of your questions and/or concerns. The first video deals with incorporating the “tricks” great speakers use to get their message across to an audience.  The second video focuses on ways you can control and manage your speech anxiety.

Go to the Blog#5: Public Speaking page on Canvas