Product placement is where a brand is incorporated into the scenery of a movie or television show.  And it’s big.  Really BIG.  In 2017, product placement represented $8.78 Billion in spending.

One of the first product placements I remember is Reese’s Pieces in the movie E.T. The Extraterrestrial.

Yes, originally Spielberg wanted to use M&Ms, but Mars turned him down.  So, the producers went to Hershey’s and they gladly gave permission to use their little known candy.  The deal struck between Hershey’s and the movie producers involved a Hershey promise to spend $1,000,000 to promote the movie.  In exchange, Hershey’s could use E.T. in their ads.  After the movie’s premier, sales of Reece’s pieces increased by 65 percent.

When they re-released E.T. in 2002, Hershey’s struck a similar deal (as this commercial demonstrates.)

There are four types of product placement.

The product isn’t just sitting on the table; now it’s part of the story line

In this digital age, advertisers are too aware of how fast forward on the remote impacts a commercial’s effectiveness.  Smaller audiences television audiences means advertisers are looking for means, other than a 30 second spot, to get their product into the hands of consumers.  In fact, product placement has kept some television shows on the air.  Spend 5 minutes and watch the very clever Stephen Colbert explain how this works. 🙂 (Video is back from the Colbert Report days.  Classic!)

Like those horrible soap opera scenes, product placement has reached a new level.  The product becomes a part of the story.
For example, one of the great scenes from Wayne’s World involves Wayne and Garth (not) hawking various products. 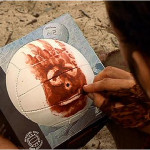 Other times, the product placement is seamlessly incorporated into the script.  In the Tom Hanks movie Cast Away a Wilson volleyball becomes a main character.  And an unopened FedEx box provided a plot twist.

The products range from cars to sunglasses to iPhone.  It’s staggering how much product placement there is in the Avenger movies!  Staggering! 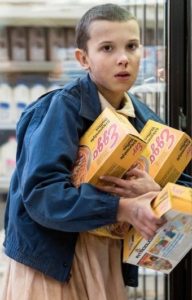 A more recent example of product placement becoming part of the storyline comes from Netflix’s Stranger Things and Eleven’s obsession with Eggo Waffles.

Paid for or not, the sales of Kellogg’s Eggos increased by more than 10 percent while viewers binge watched the Netflix series.

So, in 2017 when Stranger Things ran a promo for the new season during the Super Bowl, Eggos gladly turned over a 1980s version of a television commercial to be part of the promotion.

Other examples of product placement

On Seinfeld, Kramer drops a Junior Mint into a man’s chest during surgery.

M&Ms and Livesavers turned down Seinfeld’s request to use their candies.  Junior Mints didn’t pay for the product placement, yet this episode, which inadvertently credits Junior Mints for saving a man’s life, increased Junior Mints viability.

Trivia – When Kramer slips and the Junior Mint flies through the air and into the patient, the Seinfeld crew actually used a York Peppermint Patty.  Junior Mints were too small to follow on camera.

On Bones (2005-2017), Toyota provides the cars and, when the lead character uses parking assist, navigation or other vehicle feature, it becomes part of the script. You can almost hear the script stopping, the product placement run, and the script picking up again.

And this is just one example of how the series incorporated product placement into the script. 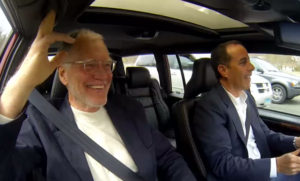 Even video games have some sometimes product placement, including the use of billboards in the Burnout Paradise driver game for the Obama 2008 presidential campaign! (It’s about 1:20 in the video) 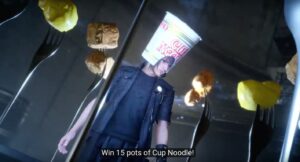 And just when I thought I saw it all…I did some research and found this.  One of the main characters in Final Fantasy XV wears a Nissin Cup Noodles on his head.  Apparently, one of the quests in the game is to look for toppings to make the already delicious Cup Noodles taste even better.  I’m not a gamer.  I don’t get it. But it must be working.

Now, product placement has gone digital.  Advertisers don’t even have to provide a product while the show or movie is being shot.  It can be digitally inserted long after the television show or movie has been edited and aired.  This 5:30 minute Slate video shows you how.

The technology is so good, they say it won’t be long before you’ll watch a movie where they digitally place chicken or beef products in a kitchen scene.  Your vegan friend could be watching the same movie in another room and they would digitally replace the meat with fruits and veggies in the same scene.

Here’s a 1 minute reel for another digital product placement company.  It’s amazing how seamlessly it happens.

Product placement is all around us.  For this assignment you’ll have to do some research into production placement.  Go to Blog:Product Placement for assignment details.