Before we can start talking and writing news we need to know what news is.  Generally, a picture of the family cat is NOT news.  Unless the family cat kept mewing and clawing at the neighbor’s door and that woke them up so they got out of the house before it burned down to the ground.  Now your family cat IS newsworthy!

There really isn’t a magic formula for determining what news is.  I wish!  If there were, I’d bottle it up, sell it for a hefty price and retire someplace where temperatures are in the low 80s and bare-chested men bring me drinks with little umbrellas in them all day long.  (I can dream, can’t I?)

Which stories should we cover? What story leads the newscast?  What story goes above the fold?  Which story goes below the fold or on page 3? Do we commit a reporter and a photographers to this story?  Or do we commit the entire news team?

These are all tough questions, with a lot of variables you must factor in.  But… there are some guidelines to help us determine what is NOT newsworthy, what is newsworthy, and just how newsworthy a story is.  You’ll find various versions of these guidelines around the business, but they are generally combinations or more precise  divisions of these seven qualities or factors.

That’s a picture of me during a live shot at the Eastern Idaho State Fair many years ago.  I include the image because I considered these news judgment factors every day of my television career.  Those factors are timeliness, proximity, prominence, impact, conflict, human interest and uniqueness.  Let’s look at each of these factors individually. 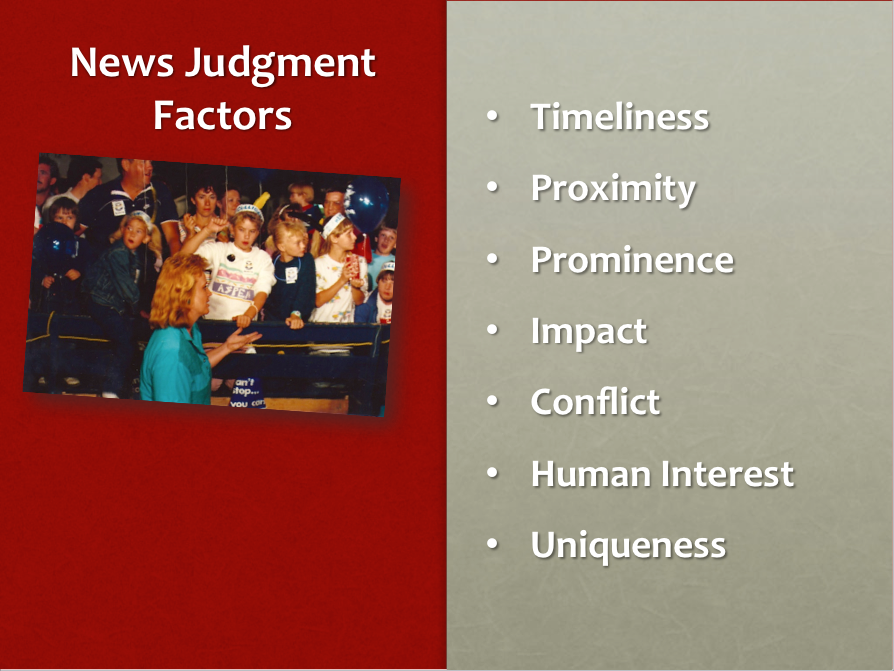 Timeliness is simple.  The more recent something happened the more news worthy it becomes. 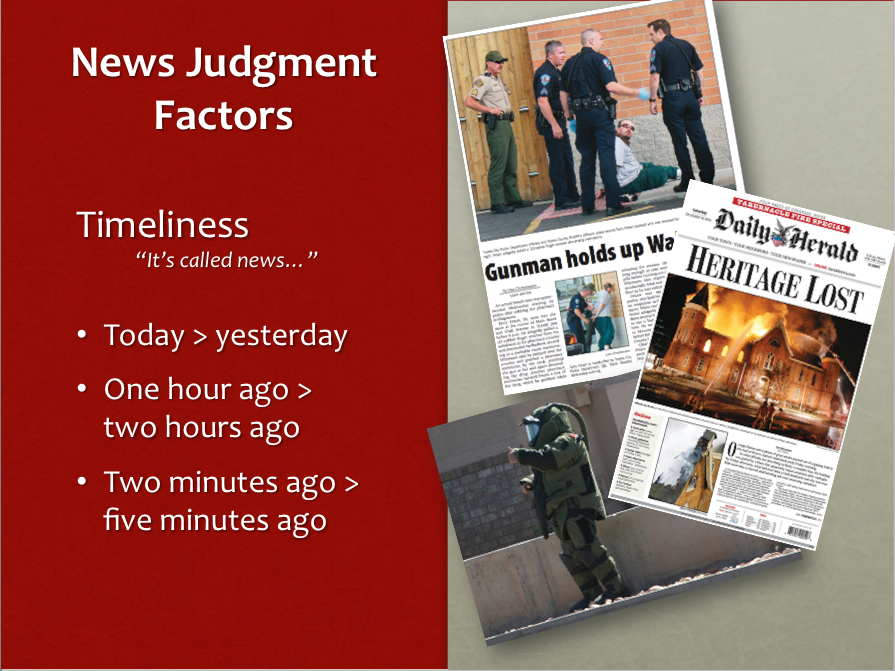 The photos in the slide above won awards from the Utah Chapter of the Society of Professional Journalists.  I put together their awards show video, so I have access to these images.  (BTW- because I’m using them in a teaching situation I don’t have to ask for permission (fair use).  If I were selling this course on-line, I would have to ask permission and probably pay some type of royalty.)

Another easy one.  The closer it is to us, the more newsworthy it is.

But again, the cars and passersby are near me, but that doesn’t necessarily make them newsworthy. 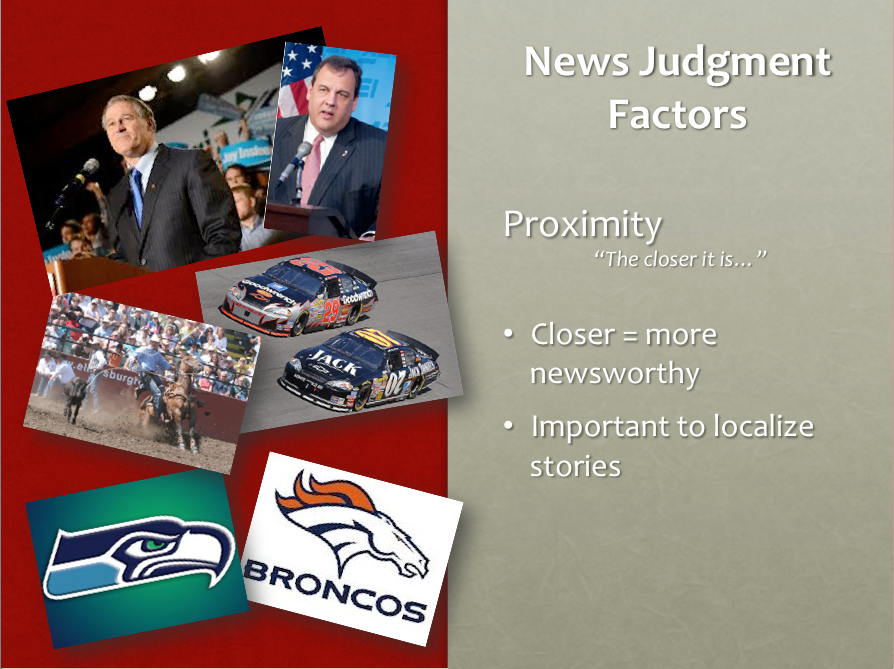 The more well-known a person is, the more newsworthy they are.

That’s because I’m more prominent than you simply because I’m a faculty member in charge of educating young minds. I have a role in the community. James Gaudino is more prominent than I because he holds a government appointed position and he represents the university.  Therefore, he gets more coverage than I would for a DUI.  The bigger they are, the more newsworthy they are. 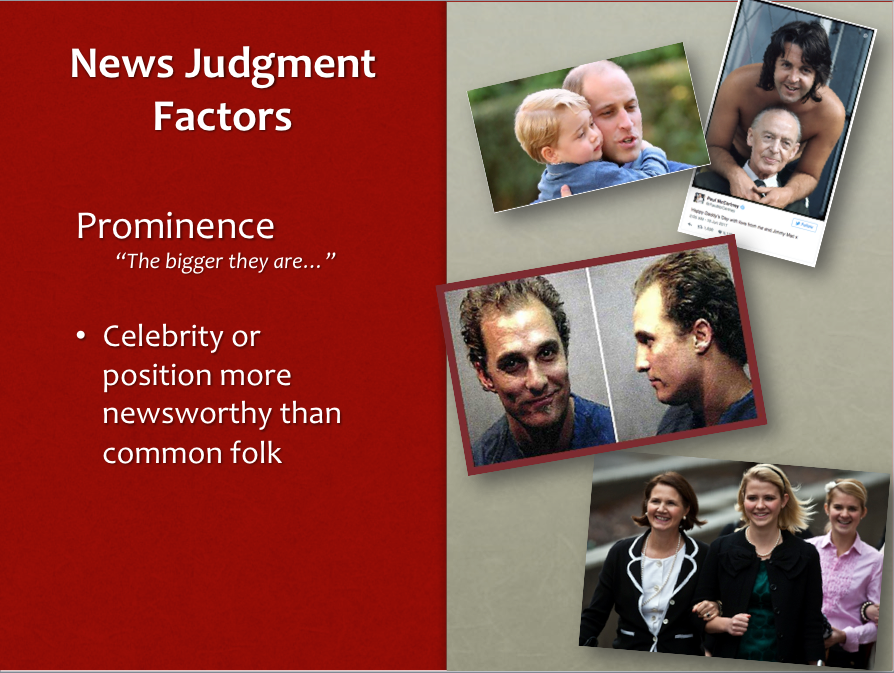 But the intensity of the event can also be a factor.  My mother-in-law’s power outage lasted for nearly a week and impacted five houses on her street.  After a day and half they move families (and their visiting relatives) out of their homes and into a local hotel.  We ended up staying with relatives and then driving an hour south to celebrate Christmas at my son’s house in Eugene.  My mother-in-law’s power outage became more newsworthy due to the intensity of the impact the longer it went on and when it forced families out of their homes for the holidays. 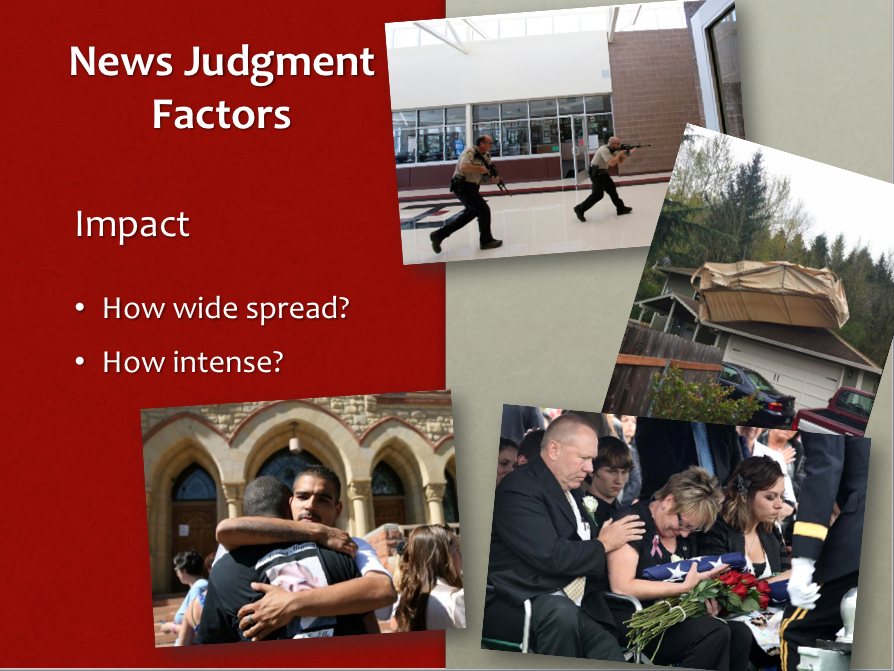 If we were in a class together, I’d pull up this slide and say “This is what I’m going to look like in 15 years.”  The pictures are of my mother.  I include her here because for many years she was smack dab in the middle of a conflict.

Conflict is when people are at odds with each other or when they feel threatened by others.  It’s why when George Clooney protested against the genocide in Darfur he wanted to get arrested.  A prominent personality, being hauled off in handcuffs (really, they were just zip ties) would bring more attention to the government sponsored rape and murder going on in Sudan.  The story of a nice guy doing a good thing and being arrested for doing a good thing was a “conflict” itself. 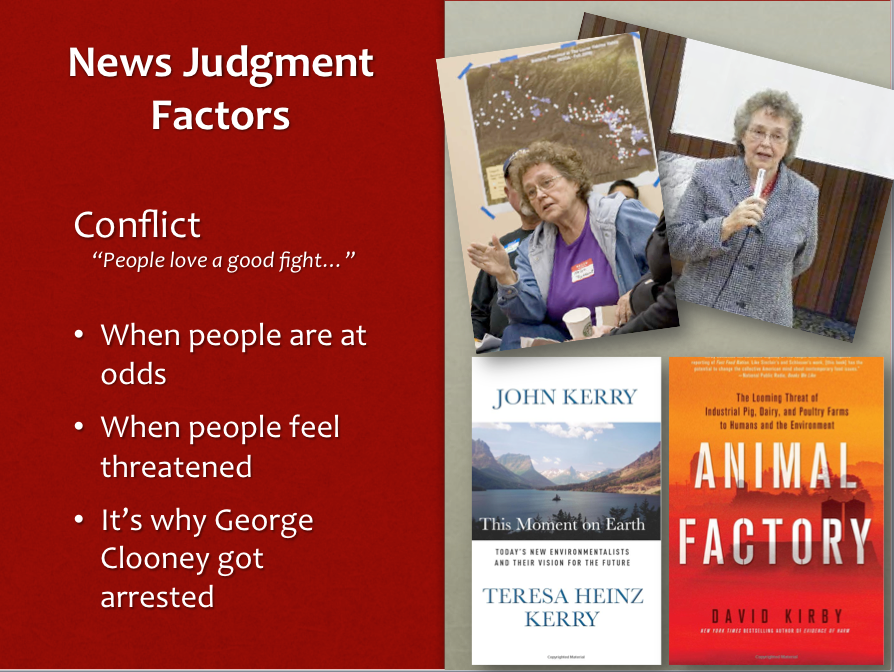 Some things are interesting not because they are timely, or local, or involve a prominent person, or impact a group or cause conflict.  They are newsworthy simply because it appeals to our human need to seek knowledge and be entertained.

Generally, these human interest stories center around the arts, health and entertainment.  But, occasionally, what can be a news story ends up having more of a human interest angle.  In that case, it becomes a “feature” story image. 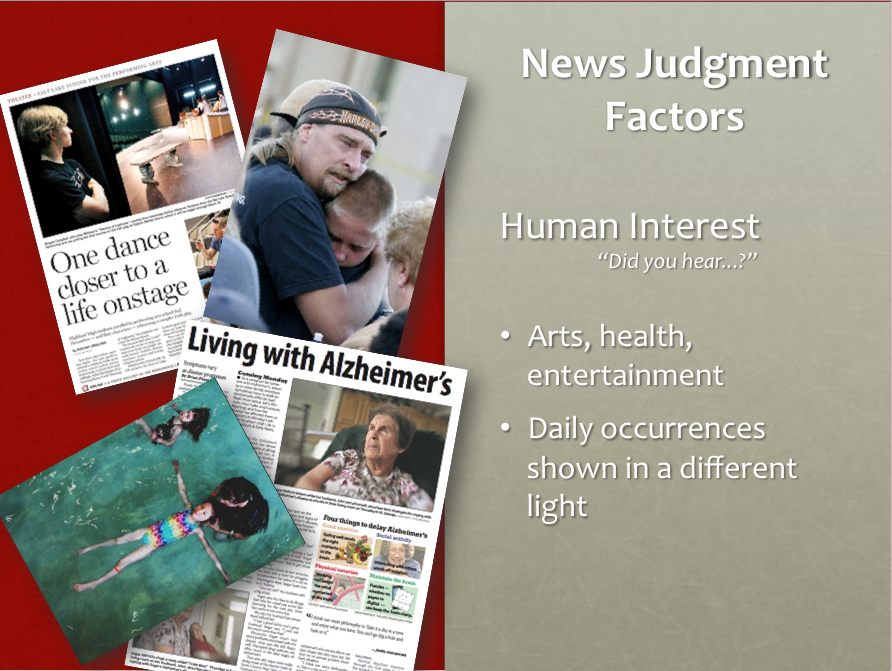 This is why you see water-skiing squirrels and video of a world-record 850 person human/mattress domino event in the news.

A minor accident of the Interstate involving two trucks that doesn’t back up traffic isn’t newsworthy.  But if one of the trucks was carrying peanuts and the other truck was hauling elephants to the circus this minor accident becomes newsworthy. 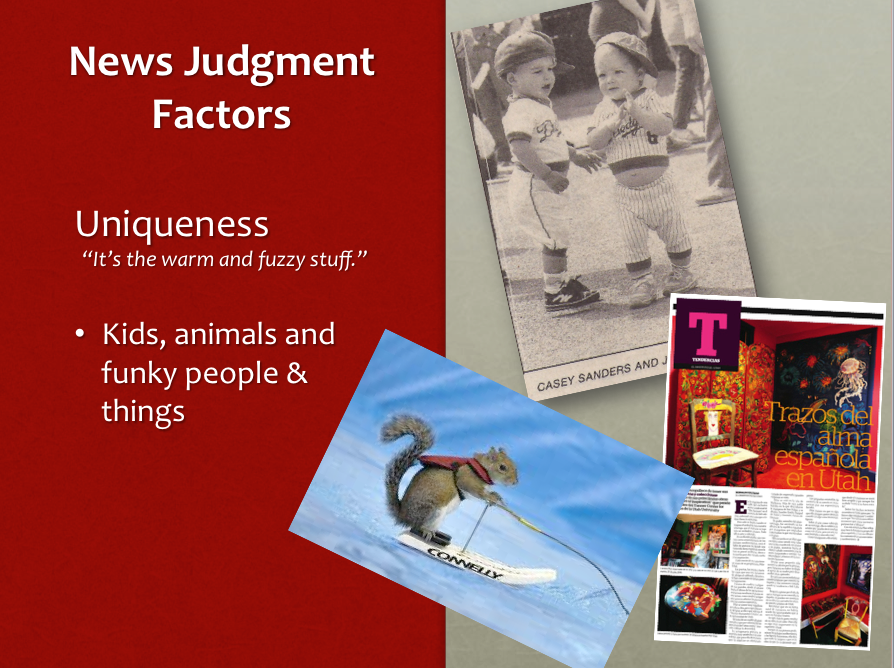 None of these news factors on their own make something newsworthy.  Generally it take a combination of two, three or more factors to make a story newsworthy.  But, if I had to say, timeliness, proximity and prominence are the heavy hitters. 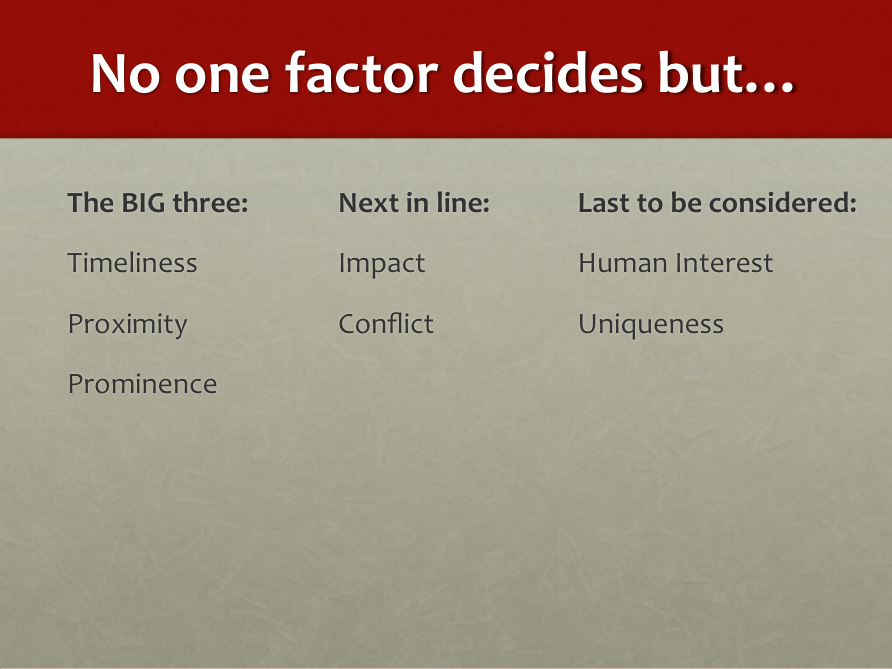 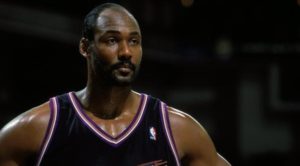 Let me share a hypothetical example I came up with when I lived in Utah.  You have to know who Karl “Mailman” Malone is for this example to work.  Malone played power forward for Utah Jazz.  He won an Olympic Gold Medal as a member of 1992’s “Dream Team.” Twice he was the NBA’s MVP, he landed on the All-Star team 14 times, and made the All NBA First Team 11 years.  He sank more career points (36928) than any NBA player other than Kareem Abdul-Jabbar.  Basically, Malone was hot stuff and the Jazz were in the playoffs thanks to him. 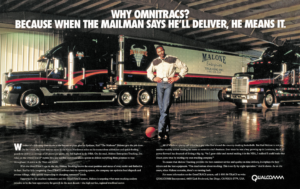 In addition to playing NBA basketball, Malone loved driving truck.  We’re not talking a Ford F150 or a Ram 3500.

Malone had a commercial driver’s license and drove 18-wheelers. He owned a trucking business known for its colorful trailers promoting Malone Enterprises.

Okay, now that you have that information, here’s my hypothetical event that involves all seven news factors.

Now imagine the same scenario with two ordinary trucks, that didn’t back up traffic significantly, no one prominent was involved, and it happened 150 miles away in a rural area two days ago.  Not so newsworthy, right?

Now for a real example

When I worked in the Boise, Idaho television market I got pulled off a story about teenagers helping the community in order to cover a house fire.  Why?  While both stories had impact, the house fire had a more intense impact and had timeliness on its side.

When my videographer and I arrived, the fire fighters were rolling up the hoses.  There were no flames.  All three adults and five kids made it out of the house safely.  Sure, it was still timely and close, but there wasn’t much impact, and no one prominent was involved. Not much of  a story, right?  Wrong.  Thanks to human interest and uniqueness the house fire story ended up the second story in the newscast that day.  The lead story focused on the end of the Idaho legislative session.

How did my story end up second in the line-up?  Well, I got an interview with the home owner.  He told me all his family’s possessions were ruined.  He had no clothes for his kids.  No diapers. Nothing.  His car had just broken down.  He felt as though moving to the area had just brought on a lot of bad luck.  He said he was thinking about moving back to Coeur d’Alene, Idaho.

Now that’s human interest. But there’s gotta be more to make it a top story, right?  There was.

I got another interview with the couple’s friend.  She sobbed while describing how she ran back in the burning house to grab the second of two kids she saved from the fire.  With tears running down her face, she described how she tripped over her own dog in order to rescue the second kid.  She said her dog was still in the house, dead, but she was glad she helped get the kids out.

OMG! That’s human interest on overdrive with some uniqueness toss in.  After we ran the story, our viewers flooded the family with food and clothes. The woman received nine different offers of puppies to replace her dead dog.

You didn’t think I’d make you read all this stuff and just let you alone, did you?